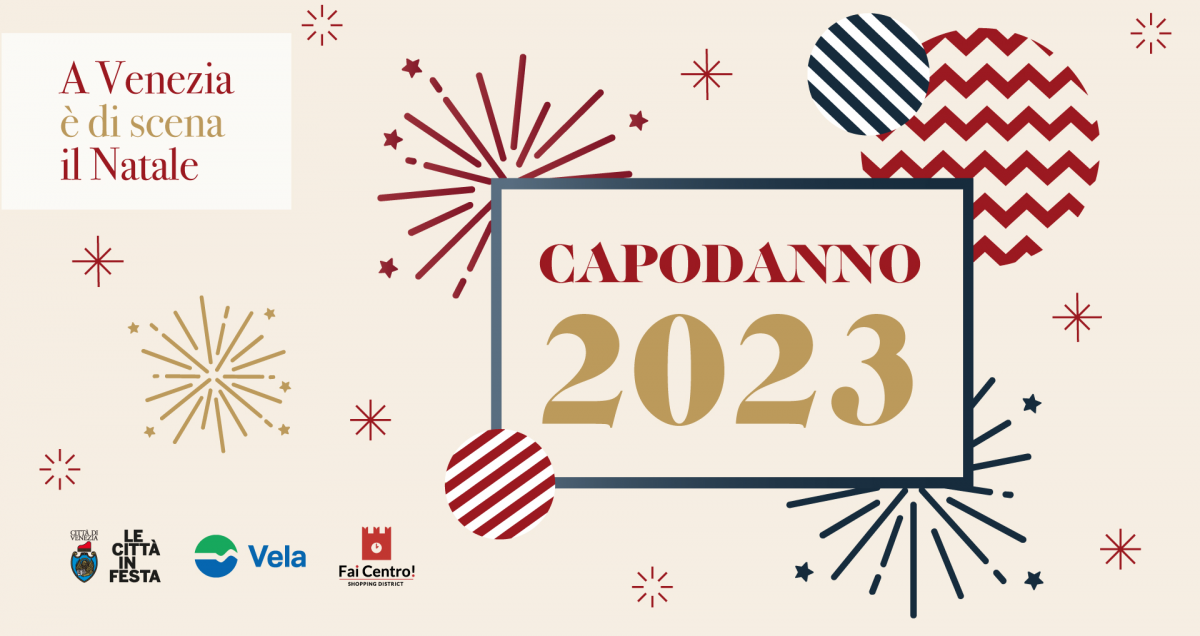 Venice doubles the New Year offering two different proposals to greet the old year and welcome 2023, in the lagoon and on the mainland. Promoted by Vela Spa on behalf of the City Council in partnership with the Venice Chamber of Commerce and the Consorzio di Tutela del Prosseco DOC, New Year’s Eve 2023 will offer a wide choice for citizens and visitors of all ages. The toasts of good wishes, illuminated by fireworks, will characterize the New Year’s Eve in Venice. At midnight, the Basin of San Marco will light up thanks to the fireworks display, designed to welcome the most awaited night of the year in an exciting and evocative setting. The show is signed by the historic firm of Melara of Rovigo, Parente Fireworks, who for over a century has been providing fireforks for public and private events of great prestige, including the bright show of the Redentore festival. The best view to enjoy the show will be near Arsenale and along Riva degli Schiavoni, Riva Ca’ di Dio, Riva San Biagio, Riva dei Sette Martini while the fires will not be visible from Piazza and Piazzetta San Marco. Starting from 23:30 some artifices will be launched to facilitate the positioning of the public along the banks by the stead.

Piazza Ferretto in Mestre stands, however, once again as the place dedicated to music to celebrate the arrival of the new year. In the heart of the city - lit up in celebration, among illuminations, light sculptures and the large christmas tree - the music of DJ Ringo, DJ Toky and DJ Alteria will mark the end of the old year and the beginning of the new one, with exceptional guests, in the name of Virgin Radio TV music, which embraces an audience of all ages. Starting at 22:00, DJ RINGO PRESENTS: ROCKIN’ NEW YEAR with the DJs of VIRGIN RADIO. With the conduction of DJ Ringo, the stage of Piazza Ferretto will be animated by Timothy Rock Cavicchini, already protagonist of the famous program “The Voice”, which will propose a fun live “light” involving in style talent the audience present.
It will then be the turn of Alteria, one of Virgin Radio’s Flagship women’s show, which successfully leads Morning Glory and has just finished a world tour with Ian Pace of Deep Purple. Alteria, who is also an extraordinary singer, ranges with her DJ set from Classic Rock to current music.
Ringo will bring to the stage of Piazza Ferretto his historic program “Revolver”: beloved TV and radio personality, he is artistic and creative director and founder of Virgin radio, currently host of the program of Italy 1 Drive Up. Over the years, his DJ sets have animated the largest Italian festivals and clubs preceding the live performances of the artists during Florence Rocks, Idays Milan and dozens of other concerts of the most famous international artists.
Alessandro Toky – another historic DJ of Virgin Radio, but also producer and sound engineer – will animate the celebrations for the end of 2022. On air on Virgin with Revolver, Morning Glory and Rock Party Toky is an all-round rock DJ, able to engage and entertain any type of audience. Guest in the most important clubs in Italy from Milan to Sardinia, together with Ringo opened important rock concerts such as AC/DC and Guns&Roses and Vasco Rossi.

After the night festivities on January 1, 2023 will open with the traditional Concert of the La Fenice Opera House, conducted by Master Daniel Harding, which, as usual, will be broadcast live on Rai 1. Divided into a first exclusively orchestral and a second dedicated to melodrama, the concert will offer a roundup of arias, duets and choral passages performed by soloists of absolute prestige and the Chorus of the Teatro La Fenice. The musical performance will close with two famous pages by Giuseppe Verdi, cornerstones of the Italian musical heritage: the Choir “Va’ pensiero sull’ali dorate” from Nabucco and the festive toast “Libiam ne’ lieti calici” from La Traviata.